Areas of expertise
I am a researcher at EBD-CSIC (Doñana Biological Station), Seville. I am broadly interested in understanding how global change drivers impact community structure and composition, and how those impacts translate to the ecosystem functioning. I like to work with plant-pollinator communities because they show complex responses to land use change, climate warming or biological invasions, and encapsulate a critical ecosystem function, pollination. www.bartomeuslab.com

Which pitfall traps and sampling efforts should be used to evaluate the effects of cropping systems on the taxonomic and functional composition of arthropod communities?

On the importance of experimental design: pitfall traps and arthropod communities

Despite the increasing refinement of statistical methods, a robust experimental design is still one of the most important cornerstones to answer ecological and evolutionary questions. However, there is a strong trade-off between a perfect design and its feasibility. A common mantra is that more data is always better, but how much is enough is complex to answer, specially when we want to capture the spatial and temporal variability of a given process. Gardarin and Valantin-Morison [1] make an effort to answer these questions for a practical case: How many pitfalls traps, of which type, and over which extent, do we need to detect shifts in arthropod community composition in agricultural landscapes. There is extense literature on how to approach these challenges using preliminary data in combination with simulation methods [e.g. 2], but practical cases are always welcomed to illustrate the complexity of the decisions to be made. A key challenge in this situation is the nature of simplified and patchy agricultural arthropod communities. In this context, small effect sizes are expected, but those small effects are relevant from an ecological point of view because small increases at low biodiversity may produce large gains in ecosystem functioning [3].
The paper shows that some variables are not important, such as the type of fluid used to fill the pitfall traps. This is good news for potential comparisons among studies using slightly different protocols. However, the bad news are that the sampling effort needed for detecting community changes is larger than the average effort currently implemented. A potential solution is to focus on Community Weighed Mean metrics (CWM; i.e. a functional descriptor of the community body size distribution) rather than on classic metrics such as species richness, as detecting changes on CWM requires a lower sampling effort and it has a clear ecological interpretation linked to ecosystem functioning.
Beyond the scope of the data presented, which is limited to a single region over two years, and hence it is hard to extrapolate to other regions and years, the big message of the paper is the need to incorporate statistical power simulations as a central piece of the ecologist's toolbox. This is challenging, especially when you face questions such as: Should I replicate over space, or over time? The recommended paper is accompanied by the statistical code used, which should facilitate this task to other researchers. Furthermore, we should be aware that some important questions in ecology are highly variable in space and time, and hence, larger sampling effort across space and time is needed to detect patterns. Larger and longer monitoring schemes require a large effort (and funding), but if we want to make relevant ecology, nobody said it would be easy. 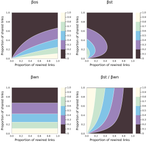 Dissimilarity of species interaction networks: quantifying the effect of turnover and rewiring

How to evaluate and interpret the contribution of species turnover and interaction rewiring when comparing ecological networks?

A network includes a set of vertices or nodes (e.g., species in an interaction network), and a set of edges or links (e.g., interactions between species). Whether and how networks vary in space and/or time are questions often addressed in ecological research.

Two ecological networks can differ in several extents: in that species are different in the two networks and establish new interactions (species turnover), or in that species that are present in both networks establish different interactions in the two networks (rewiring). The ecological meaning of changes in network structure is quite different according to whether species turnover or interaction rewiring plays a greater role. Therefore, much attention has been devoted in recent years on quantifying and interpreting the relative changes in network structure due to species turnover and/or rewiring. 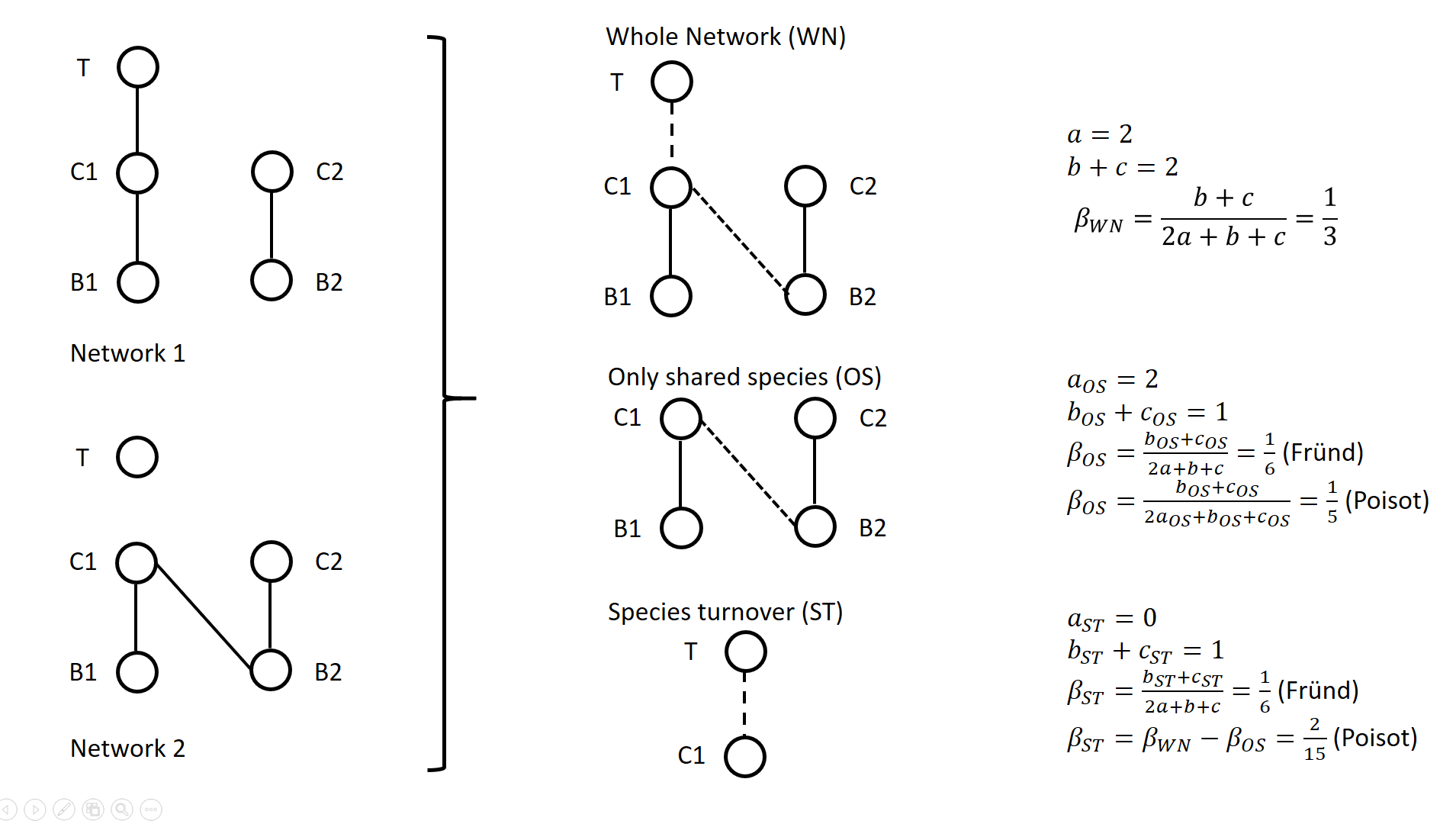 To clarify and avoid misinterpretation of the calculation of \( \beta_{OS} \) and \( \beta_{ST} \) in Poisot et al. (2012), Poisot (2022) provides a new, in-depth mathematical analysis of the decomposition of \( \beta_{WN} \). Poisot et al. (2012) quantify in \( \beta_{OS} \) the actual contribution of rewiring in network structure for the subweb of common species. Poisot (2022) thus argues that \( \beta_{OS} \) relates only to the probability of rewiring in the subweb, while the definition of \( \beta_{OS} \) by Fründ (2021) is relative to the count of interactions in the global network (considered in denominator), and is thereby dependent on both rewiring probability and species turnover. Poisot (2022) further clarifies the interpretation of \( \beta_{ST} \). \( \beta_{ST} \) is obtained by subtracting \( \beta_{OS} \) from \( \beta_{WN} \) and thus represents the influence of species turnover in terms of the relative architectures of the global networks and of the subwebs of shared species. Coming back to the example of Fig.1., the Poisot et al. (2012) formula posits that \( \frac{\beta_{ST}}{\beta_{WN}}=\frac{2/15}{1/3}=2/5 \), meaning that species turnover contributes two-fifths of change in network structure, while rewiring in the subweb of common species contributed three fifths.  Conversely, the approach of Fründ (2021) does not compare the architectures of global networks and of the subwebs of shared species, but considers the relative contribution of unique links to network dissimilarity in terms of species turnover and rewiring.

Areas of expertise
I am a researcher at EBD-CSIC (Doñana Biological Station), Seville. I am broadly interested in understanding how global change drivers impact community structure and composition, and how those impacts translate to the ecosystem functioning. I like to work with plant-pollinator communities because they show complex responses to land use change, climate warming or biological invasions, and encapsulate a critical ecosystem function, pollination. www.bartomeuslab.com