Biodiversity loss can have important consequences for ecosystem functions, as exemplified by a large body of literature spanning at least three decades [1–3]. While connections between species diversity and ecosystem functions are now well-defined and understood, the importance of diversity within species is more elusive. Despite a surge in theoretical work on how intraspecific diversity can affect coexistence in simple community types [4,5], not much is known about how intraspecific diversity drives ecosystem processes in more complex community types. One particular challenge is that intraspecific diversity can be expressed as observable variation of functional traits, or instead subsist as genetic variation of which the consequences for ecosystem processes are harder to grasp.
Raffard et al. [6] examined how intraspecific biodiversity loss in a consumer fish changes species diversity at lower trophic levels and ecosystem processes in pond mesocosms. An interesting feature of this experiment is that it crosses functional and genetic intraspecific diversity. To do so, Raffard and colleagues measured and genotyped European minnow (P. phoxinus) individuals sampled from streams across southern France. Combining these collected specimens into experimental ponds allowed them to control functional (population variance of body size) and genetic intraspecific richness (number of genotypes).
Effects on minnow biomass production were mostly small; biomass was significantly reduced only when lowering both functional and genetic richness. However, the consequences for lower trophic levels (zooplankton and macroinvertebrates) were more pronounced and – importantly – not intuitive. For instance, the macroinvertebrate community was less species-diverse at higher minnow functional richness. If minnows with different body sizes would be the main regulator factors [7] explaining macroinvertebrate interactions, one would expect a more diverse set of minnow body sizes (i.e. higher functional minnow richness) to permit higher instead of lower macroinvertebrate richness. At the same time, the macroinvertebrate community was more species-diverse at higher minnow genotype richness, which could indicate unobserved minnow traits determining macroinvertebrate diversity more than the usual suspects (functional consumer richness). Such unobserved traits could be behavioral traits, allowing for resource partitioning among fish.
The consequences of functional minnow diversity loss on zooplankton diversity were negative, as expected in case body size differences among fish would facilitate coexistence of their zooplankton prey, as explained above. However, this was only the case when genetic diversity was high, suggesting nonstraightforward interactive effects of observed and non-observed traits on prey diversity.
The effects of functional and genetic minnow diversity loss on invertebrate (macroinvertebrates and zooplankton) abundance were more consistent than for invertebrate diversity. This suggests again nonstraightforward relationships in this experimental ecosystem, but now between invertebrate diversity and abundance. When using abundance as a proxy for an ecosystem process (which the authors did not), this result illustrates that biodiversity loss in multitrophic communities can have consequences that are challenging to interpret, let alone predict [8,9]. Path analyses showed how the observed changes of invertebrate diversity and abundance co-determined decomposition, a key ecosystem function. These path analyses had highest explanatory power show when including both kinds of intraspecific diversity.
Taken together, the results by Raffard and colleagues suggest that genetic consumer richness can drive species diversity of connected trophic levels and ecosystem processes with similar magnitude as functional diversity. Indeed, the effects of genetic consumer richness were shown to be so strong as to compensate or exacerbate the loss of observed functional richness. The exact mechanisms explaining these effects remain to be identified, however. The possibility that fish grazing by fish with different (observed or not observed) traits regulates coexistence among invertebrate prey, for instance, would depend on how strong fish consumption feeds back on prey growth during a 30-week experiment. As the authors indicate, detailed studies on resource partitioning among consumers (e.g. using stable isotope labelling) can shed light on these matters. Doing so may address a more fundamental question, which is if the mechanisms linking intraspecific diversity to function are different from those linking interspecific diversity to function, and at what time scales. 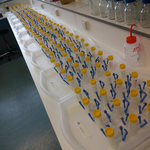 In this article, Saade et al. (2021) investigate how the rate of local extinctions and their spatial distribution affect recolonization dynamics in metacommunities. They use an elegant combination of microcosm experiments with metacommunities of freshwater ciliates and mathematical modelling mirroring their experimental system. Their main findings are (i) that local patch extinctions increase both local (α-) and inter-patch (β-) diversity in a transient way during the recolonization process, (ii) that these effects depend more on the spatial distribution of extinctions (dispersed or clustered) than on their amount, and (iii) that they may spread regionally.
Microcosm experiments are already quite cool just by themselves and have contributed largely to conceptual advances in community ecology (see Fraser and Keddy 1997, or Jessup et al. 2004 for reviews on this topic), but they are here exploited to a whole further level by the fitting of a metapopulation dynamics model. The model allows both to identify the underlying mechanisms most likely to generate the patterns observed (here, competitive interactions) and to assess the robustness of these patterns when considering larger spatial or temporal scales. This release of experimental limitations allows here for the analysis of quantitative metrics of spatial structure, like the distance to the closest patch, which gives an interesting insight into the functional basis of the effect of the spatial distribution of extinctions.

A major strength of this study is that it highlights the importance of considering the spatial structure explicitly. Recent work on ecological networks has shown repeatedly that network structure affects the propagation of pathogens (Badham and Stocker 2010), invaders (Morel-Journel et al. 2019), or perturbation events (Gilarranz et al. 2017). Here, the spatial structure of the metacommunity is a regular grid of patches, but the distribution of extinction events may be either regularly dispersed (i.e., extinct patches are distributed evenly over the grid and are all surrounded by non-extinct patches only) or clustered (all extinct patches are neighbours). This has a direct effect on the neighbourhood of perturbed patches, and because perturbations have mostly local effects, their recovery dynamics are dominated by the composition of this immediate neighbourhood. In landscapes with dispersed extinctions, the neighbourhood of a perturbed patch is not affected by the amount of extinctions, and neither is its recovery time. In contrast, in landscapes with clustered extinctions, the amount of extinctions affects the depth of the perturbed area, which takes longer to recover when it is larger. Interestingly, the spatial distribution of extinctions here is functionally equivalent to differences in connectivity between perturbed and unperturbed patches, which results in contrasted “rescue recovery” and “mixing recovery” regimes as described by Zelnick et al. (2019).

Furthermore, this study focuses on local dynamics of competition and short-term, transient patterns that may have been overlooked by more classical, equilibrium-based approaches of dynamical systems of metacommunities. Indeed, in a metacommunity composed of several competitors, early theoretical work demonstrated that species coexistence is possible at the regional scale only, provided that spatial heterogeneity creates spatial variance in fitness or precludes the superior competitor from accessing certain habitat patches (Skellam 1951, Levins 1969). In the spatially homogeneous experimental system of Saade et al., one of the three ciliate species ends up dominating the community at equilibrium. However, following local, one-time extinction events, the community endures a recolonization process in which differences in dispersal may provide temporary spatial niches for inferior competitors. These transient patterns might prove essential to understand and anticipate the resilience of natural systems that are under increasing pressure, and enduring ever more frequent and intense perturbations (IPBES 2019). Spatial autocorrelation in extinction events was previously identified as a risk for stability and persistence of metacommunities (Ruokolainen 2013, Kahilainen et al. 2018). These new results show that autocorrelated perturbations also have longer-lasting effects, which is likely to increase their overall impact on metacommunity dynamics. As spatial and temporal autocorrelation of temperature and extreme climatic events are expected to increase (Di Cecco and Gouthier 2018), studies that investigate how metacommunities respond to the structure of the distribution of perturbations are more necessary than ever.