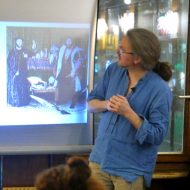 Website https://eep.univ-lille.fr/sylvain-billiard/
Areas of expertise
Theoretician in evolutionary biology and ecology Strong interactions with mathematics Mating systems, plant evolution and ecology Between individual interaction and impact on demography Interaction between genetics and demography

Doomed by your partner: when mutualistic interactions are like an evolutionary millstone around a species’ neck

Recommended by Sylvain Billiard based on reviews by 2 anonymous reviewers

Mutualistic interactions are the weird uncles of population and community ecology. They are everywhere, from the microbes aiding digestion in animals’ guts to animal-pollination services in ecosystems; They increase productivity through facilitation; They fascinate us when small birds pick the teeth of a big-mouthed crocodile. Yet, mutualistic interactions are far less studied and understood than competition or predation. Possibly because we are naively convinced that there is no mystery here: isn’t it obvious that mutualistic interactions necessarily facilitate species coexistence? Since mutualistic species benefit from one another, if one species evolves, the other should just follow, isn’t that so?

It is not as simple as that, for several reasons. First, because simple mutualistic Lotka-Volterra models showed that most of the time mutualistic systems should drift to infinity and be unstable (e.g. Goh 1979). This is not what happens in natural populations, so something is missing in simple models. At a larger scale, that of communities, this is even worse, since we are still far from understanding the link between the topology of mutualistic networks and the stability of a community. Second, interactions are context-dependent: mutualistic species exchange resources, and thus from the point of view of one species the interaction is either beneficial or not, depending on the net gain of energy (e.g. Holland and DeAngelis 2010). In other words, considering interactions as mutualistic per se is too caricatural. Third, since evolution is blind, the evolutionary response of a species to an environmental change can have any effect on its mutualistic partner, and not necessarily a neutral or positive effect. This latter reason is particularly highlighted by the paper by A. Weinbach et al. (2021).

Weinbach et al. considered a simple two-species mutualistic Lotka-Volterra model and analyzed the evolutionary dynamics of a trait controlling for the rate of interaction between the two species by using the classical Adaptive Dynamics framework. They showed that, depending on the form of the trade-off between this interaction trait and its effect on the intrinsic growth rate, several situations can occur at evolutionary equilibrium: species can stably coexist and maintain their interaction, or the interaction traits can evolve to zero where species can coexist without any interactions.

Even though Weinbach et al. interpreted the results of their model through the lens of plant-pollinators systems, their model is not specific to this case. On the contrary, it is very general, which has advantages and caveats. By its generality, the model is informative because it is a proof of concept that the evolution of mutualistic interactions can have unexpected effects on any category of mutualistic systems. Yet, since the model lacks many specificities of plant-pollinator interactions, it is hard to evaluate how their result would apply to plant-pollinators communities.

Website https://eep.univ-lille.fr/sylvain-billiard/
Areas of expertise
Theoretician in evolutionary biology and ecology Strong interactions with mathematics Mating systems, plant evolution and ecology Between individual interaction and impact on demography Interaction between genetics and demography